She needed a hero, so that's what she became.

It’s 1984 and as Australia faces off against mega powers flexing their nuclear muscle, systemic poverty and the home-grown unwashable stain of a nation’s refusal to acknowledge the legacy of racism towards its indigenous culture – Midnight Oil embark on a national tour of their album, Red Sails in the Sunset and unify a nation with lyrics charged with protest.

Argyll’s lens dips into the wide mouthed stares of audiences, witnessing social change at the windmill circling arms, of a 6’4 gyrating-maniac lead singer.

I too stood like a stunned possum in headlights, the first time I saw Peter Garrett gyrating in the 80’s, front stage with Midnight Oil, at New Zealand’s, Sweetwater’s Music Festival – there they played alongside UB40, Psychedelic Furs, Toots and the Maytals and others – I stared and gaped with a throng of sweet smoke scented revellers, shocked alive by a gyrating maniac and rousing  rhythms.

Garrett looked like someone had rented his body for the weekend, an alien perhaps, or a rogue angel on a vacay down-under in New Zealand, an alien or angel, who in his vacay haste, had lost the how-to-manual and now had no clue how to steer the 6’4 convulsing-kinetic frame that was Midnight Oil’s charismatic and out-of-this-world, lead singer, Peter Garrett.

Director Ray Argall’s, Midnight Oil 1984, delivers up a powerful moving snapshot, of a time when one of Australia’s greatest rock bands collided with Australian politics and delivered the voice of the common people to a world stage.

Intimate backstage scenes permissible through Argyll’s lens, reveal a very unrock and roll off stage lifestyle – hot tea beverages are sipped between sets, yogic stretching by Garrett on the floor of a minimalist and functional dressing room – not a band rider in site; kilometer-upon-kilometer-long jogging tracks for Drummer Rob Hirst, as he gets body ready for his marathon on stage drumming performances. His drum kit nailed to the floor at every performance.

The legacy of Midnight Oil with their fight songs, social conscience and their unique stage presence chiseled the landscape of Australian rock history and changed a nation with what they bought to the stage.

The documentary sequeways into historical live interviews, media headlines reminding us of the controversial ascension  of Midnight Oil’s front-man Peter Garrett, into the political arena.

Enigmatic and indefinable, for me Garrett vibrates with the stage presence of a rogue angel, and once seen he changes you for having looked and stared. Fellow band member, Drummer Rob Hirst, and Garrett’s friend of 45-years agrees, that whatever it is that Garrett does on stage, it cannot be called dancing, but whatever it is, it works. 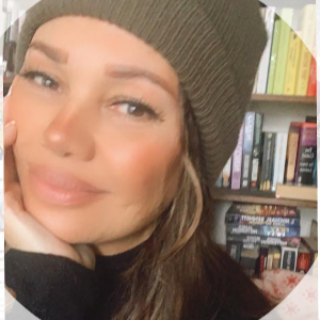 My name is Simmon Wagner and I'm a freelance writer and blogger who specializes in Fashion, Sustainable Style, Wellness, Travel and Lifestyle. After working as a daily news Journalist, Movie Reviewer, Fashion Model, Private Investigator and Sales for many years, I'm now a full-time freelance writer, helping companies with great website content and writing my first novel.